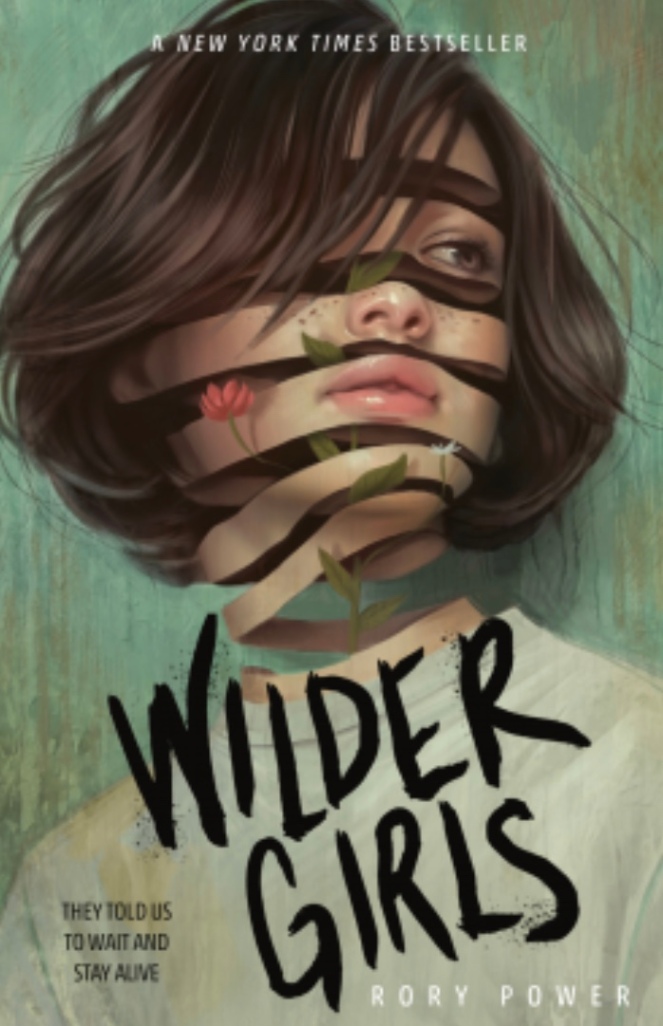 With all the craziness this world is going through currently I wasn’t quite prepared for what I would find in the novel Wilder Girls. This novel’s theme is quite timely and ironic considering it came out before we would have to imagine a world in which being quarantined wasn’t merely a fictional hypothesis.

The one person at Raxter girl’s school who keeps Hetty’s life sane is Byatt. They are best friends and bunk mates. When the Tox hits and everyone has some kind of side effect from the mysterious illness Hetty gets promoted to Boat Shift. This is the coveted group of girls who help bring back supplies that are dropped off on the tip of the island they are on. When Hetty goes on her first patrol she realizes there is more going on than what is disclosed to the students.

Hetty has the quandary of liking her best friend, but the third friend in their trio, Reese seems to have not as hard of a countenance as she lets on. When Byatt gets carted off after experiencing one of her side effects of the illness Hetty is determined to find her best friend. Will Reese help Hetty find Byatt?

I received my complimentary digital copy of Wilder Girls by Rory Power, from Delacorte Press, care of NetGalley. The views expressed are mine and my own choice. This novel is nail biting, emotional and twisted. This is a YA novel that I don’t think is best for younger teens as it does have bits of violence. I’ve heard this novel compared to Lord Of The Flies. I’ve never read this classic, but after reading Wilder Girl’s I don’t think the old classic will hold up to this novel. If you are needing a page turner to stay up all the night for a readathon then go grab a copy of Wilder Girls. 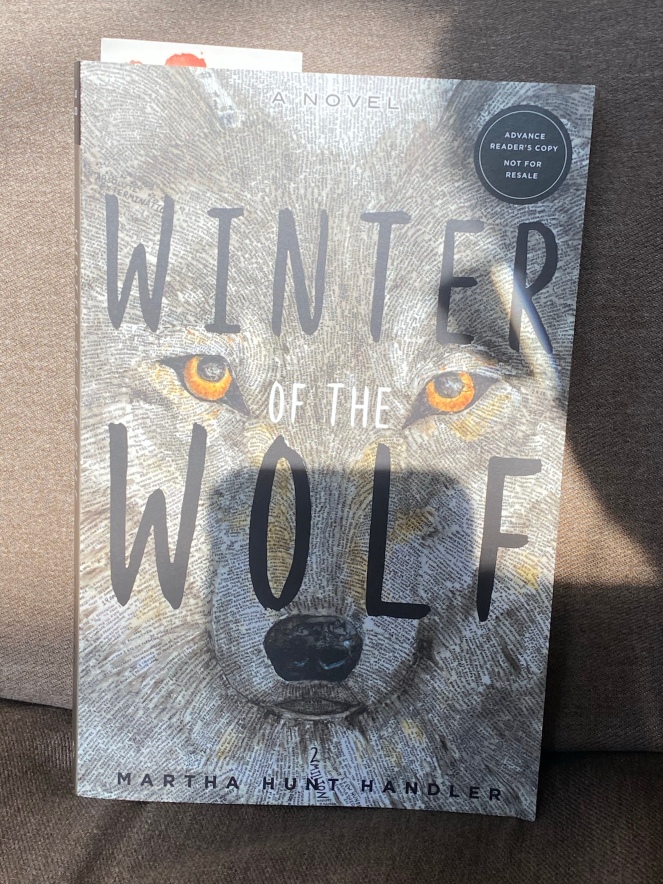 Bean’s best friend is her older brother, Sam, who named her back when he was two. He was that thrilled to be getting a little sister. Bean also, has her long time BFF, Julie. High school life seems fairly mundane and normal until the night of Sam’s best friend, Skip’s party. Sam hasn’t finished his paper, so their mom grounds him from going. He’s ticked off and fuming.

Julie and Bean were supposed to have a BFF sleepover, but that night their parents have company over. Bean gets their mom to ok Sam to quickly take her to go pick up Julie since Bean is only a freshman. That night a bad storm is ragging and the conditions are awful. The conditions were ripe for what happens next. The accident is horrific with a deer running out in front of the car and a tree stopping them.

Sam is gutted by the accident. Julie and Bean watch him go in the pouring rain to briefly lay himself over the dead deer. They get him to stumble home where his parents realize that he has a big gash down him and he’s bleeding a lot. His mom cleans him up and he retreats to his room to work on his paper. Bean and Julie go to their room.

Awhile later they hear a horrific scream. They rush to find Bean’s mom staring into Sam’s room. Bean can’t erase what her eyes are seeing. The paramedics are called and they all race to the hospital.

I received my complimentary copy of Winter Of The Wolf by Martha Hunt Handler from Greenleaf Book Press, care of FSB Associates. The views are mine and of my own choice. This novel tackles the heavy topic of death and how Bean and her family each handle Sam’s passing. 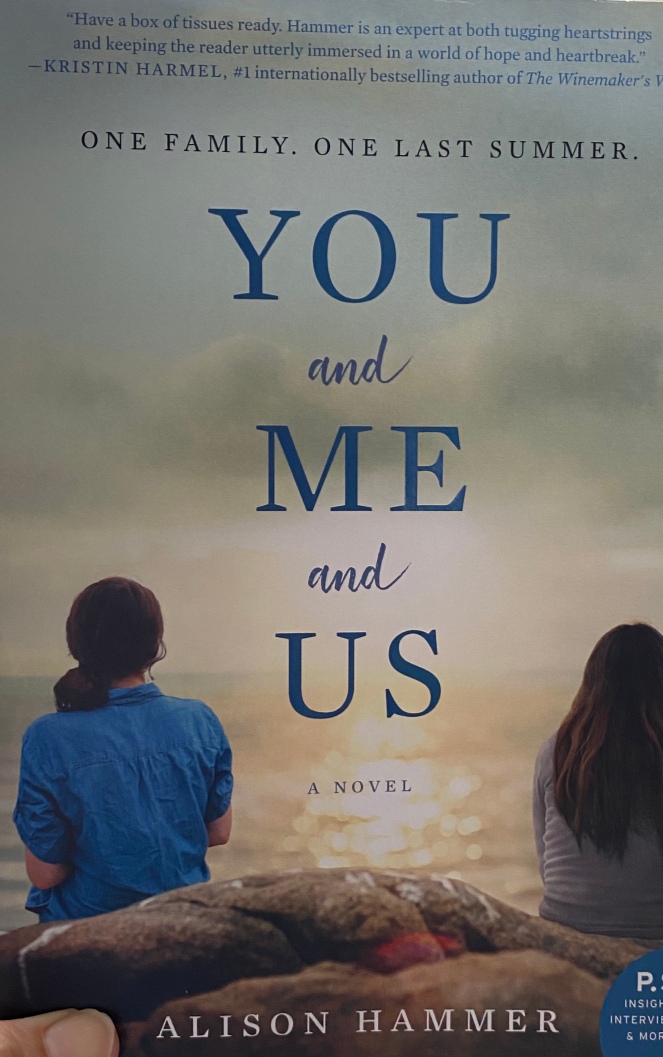 What would you do if you were given terminal news? Tommy Whistler has this quandary. Of course his significant other, Alexis wants him to fight his illness the best he can, to give him more time with her and their daughter, CeCe. Tommy prefers to have quality over quantity. What’s the point of prolonging the end result if you are too, sick to enjoy time with your loved ones? With time ticking he decides he wants to spend his last few months in his hometown.

Alexis is not thrilled to return to Tommy’s hometown. She doesn’t want to risk his past coming back into their lives, or giving their daughter food for thought. The past has to stay the past. Yes, Tommy loves and is committed to Alexis, but there are certain people she doesn’t want to share her family with.

CeCe is mad she’s missing out on acting camp. Just when her high school experience was coming together after participating in their play of, “Romeo and Juliet.” CeCe’s lead costar seems to be smitten with her supposed ‘best friend’ instead of her. Maybe her time away won’t be so awful.

Will Alexis and CeCe put aside their frustrations to help make Tommy’s summer the best it can be? This novel explores what it’s like to deal with a terminal illness and how the choices we make regarding to do treatment or not affects our family members and friends. What would you do if you were in Tommy’s shoes?

I received my complimentary copy of You And Me Snd Us by Allison Hammer from William Morrow, care of TLC Book Tours. The views are of my own choice and mine. This debut novel is a sweet, thought provoking story that will have you wishing you could hug these characters. To go grab a gorgeous copy click here to help support the publisher and to find out more about this fantastic author. Thank you TLC Book Tours for helping me discover another wonderful new favorite author. 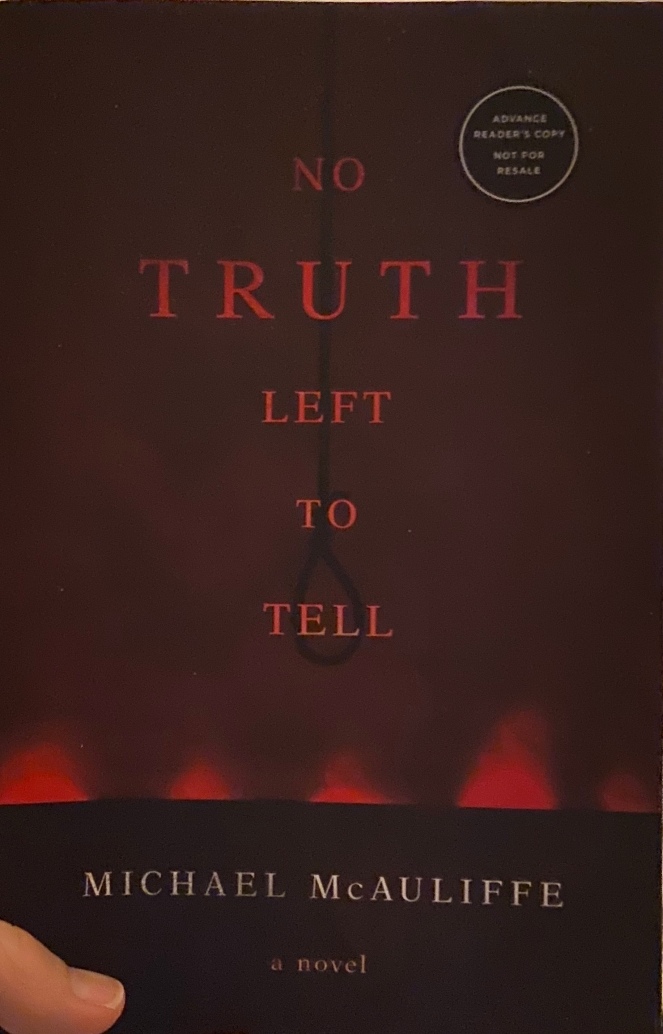 The cover is intriguing. What looks like tornadoes are in the background, the sky is red and in the front is a noose. That imagery alone makes you wonder if the story is about a natural disaster. This novel takes us to Lynnwood, LA where it’s racist past is still remembered. The town square by the courthouse is where people were lynched.

Daniel, the Grand Dragon of the local KKK wants to rile things up and decides to burn a few crosses at prominent places around town. One place was this little old lady’s front lawn. The pure terror of it caused her to have a heart attack.

Enter in Adrien Rush, the federal civil rights prosecutor from DC, who swoops in to get justice for the cross burnings. In trying to get the grand dragon to talk, Adrien realizes this group plays dirty. Will Adrien be able to get justice served?

I received my complimentary copy of No Truth Left To Tell by Michael McAuliffee from Greenleaf Book Group Press, care of FSB Associates. The views are of my own choice and mine. This debut novel is fast paced and interesting to see the inside workings from a prosecutor’s viewpoint. 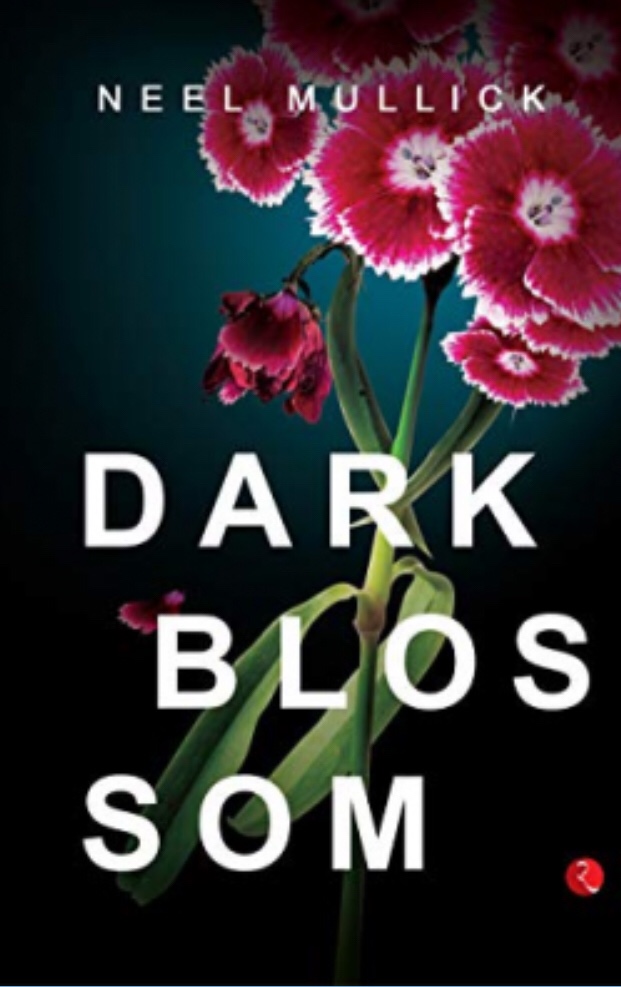 Cynthia is a therapist whose still putting her and her daughter, Lily’s life back together after her divorce. When a new client named Sam comes in for his appointment, Cynthia has no idea how this man’s story might affect her own life. Sam is reeling from the sudden passing of his wife and young teenage son, William.

Lily is a teen going through her punk phase and not too, thrilled with her mother. No matter how much Cynthia tries to open up to her daughter regarding the divorce Lily just keeps shutting her out.

When Lily and Sam meet it seems they are strangely two peas in a pod, which weirds out Cynthia. Sam seems to be good at talking with Lily, which Cynthia has been attempting to for months. When Lily and Sam mention they both have secrets, Cynthia wonders just what kind of secrets they are.

I received my complimentary digital copy of Dark Blossom by Neel Mullick from Rupa Publications, care of NetGalley. The views expressed are my own. This debut novel had me hooked. I love how Cynthia has a special journal for each of her clients. That one detail as a journal addict connected with me. The characterization of Cynthia, Sam and Lily is so realistic that I wish they were real people. This is a novel that will stay with you long after the final page. 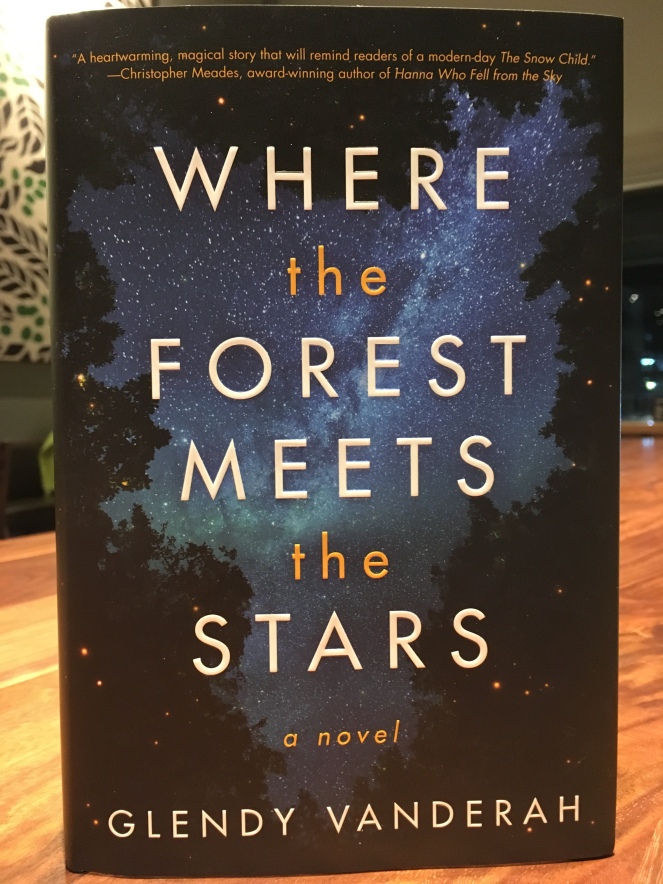 Reading debut novels is an adventure. You don’t know what thrilling new author you might discover. Honestly who can look at this book cover and not want to dive into this story? I just finished reading the last page and I already want a sequel.

Jo is still reeling from the passing of her mom and coming to terms with her own health challenges. As a bird researcher she enjoys the solitude her work gives her. One night Jo encounters a little girl who appears lost, hungry and shy. Feeding this unknown waif Jo learns this girl is an alien visiting from another plant. Ursa does seem very bright for her approximate age. Doing the right thing a few days later, Jo calls the local police, but gets the strangest reaction. Ursa runs off as soon as she senses it’s the police.

After locating Ursa, Jo realizes the police won’t be any help. Her and Ursa encounter the local egg man who sells eggs near the house she’s renting for her summer research. Egg man is handsome and Ursa seems to take a liking to him. Because of Jo’s health challenges she doesn’t feel desirable, but egg man is cute and they seem to get along.

Both Jo and egg man take to both helping out Ursa by swapping taking care of her. Through this joint effort they all start to create a bond of sorts. One day when they are out helping Jo with her field work Ursa gets whacked by a tree branch. Due to the injury Jo and egg man start to drive her to the hospital, but Ursa leaps out of the car and makes a dash for it.

This book covers a myriad of topics from what makes up a family, relationships, health, to missing children, and so much more. This book was intense from page one and had me wanting to find out what happens to Jo, Ursa and egg man.

I received a complimentary copy of Where The Forest Meets The Stars by Glendy Vanderah from Lake Union care of TLC Book Tours. The views expressed are my own.