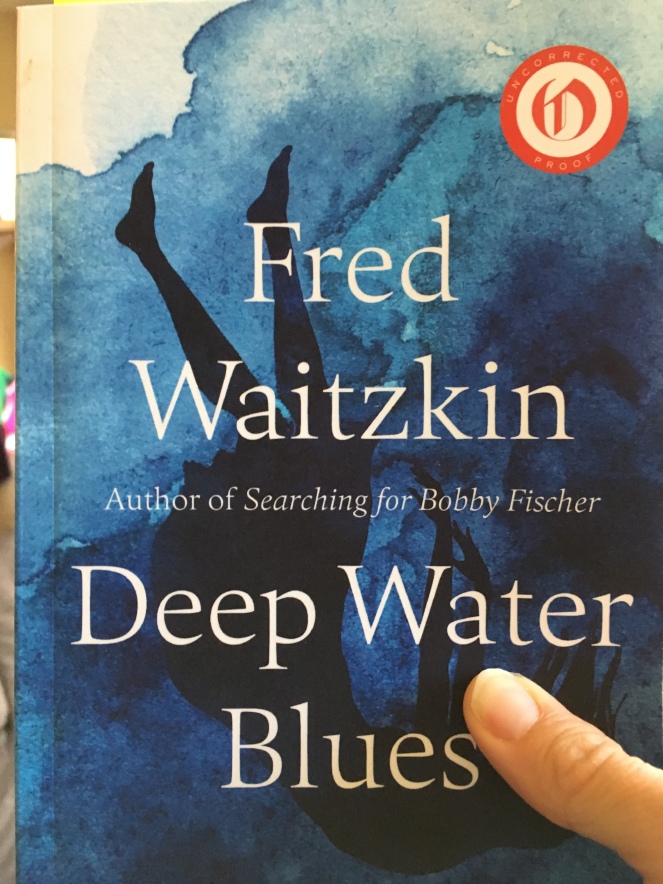 Bobby Little lives on Rum Cay hosting big dinners at his restaurant for the wealthy boaters that come into dock to have a good time. Everything is going smooth until the night naked Haitians show up asking for help. Bobby feels awful after the attempt to rescue the other Haitians who were fleeing didn’t pan out. This event sours tourists from wanting to come back after that awful bloody night.

One of Bobby’s friend Dennis gets a high idea to open a bar and while Bobby is out of town Dennis goes hog wild building his fancy restaurant and housing for his workers who are helping build his dream. When Bobby returns he realizes Dennis is in it to win and snag all the wealthy tourists from Bobby’s own restaurant. A battle of the restaurant ensues.

When things turn personal and Bobby has had it with Dennis trying to take over the island with his over priced bar, things turn ugly. Who will win? Bobby or Dennis?

I received my complimentary copy of Deep Water Blues by Fred Waitzkin from FSB Associates. The views expressed are my own and of my own will. This novel is inspired by real events. I’d never heard of Rum Cay until I read this book. I’ve never been to the Bahamas, but after Googling the island no wonder rich tourists flocked there. This book starts off a tad slow, but once it picks up speed you’ll want to find out what happens. 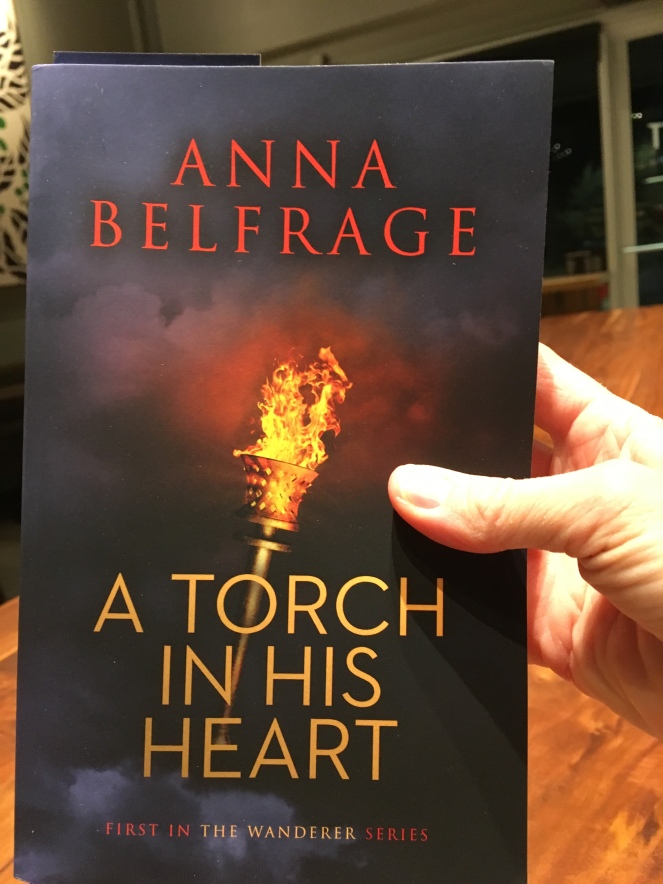 Do you crave romance? Does a love story across time sound inviting? Have you wondered about reincarnation? If so, then look no further with, A Torch In His Heart. This novel is the journey of Helle and Jason who met as children back in ancient times. Helle was royal, but Jason was of the clan of healers. Their status in life was meant to keep them apart, but they were determined to stay together. When Helle is married off to an evil royal man she is gutted. Jason is crushed.

Fast forward a number of life times. Helle is now a smart, gorgeous woman who keeps having strange dreams, or what feel like flashbacks. One day at her new job she notices a man come into the office to meet with her boss. All of a sudden she has a flashback of this particular man and recalls what his name is. He seems so familiar to her, but how is that possible if she’s never met him before? Helle feels there is some kind of connection. Her boss is furious this man has come to see him. What kind of threat does this man, Jason, possess?

Eventually Helle and Jason get to talk. Helle can’t fathom what Jason is telling her. Could her dreams be actual memories from her past life with Jason? Could this explain why her boss seems so angry toward Jason? Is her boss the man she was forced to wed so long ago?

Follow Helle and Jason as they figure out how to stay together when their past keeps haunting them in the present. Her past husband won’t be ignored and he will do anything to get her to stay with him.

I received a complimentary copy of A Torch In His Heart by Anna Belfrage from TLC Book Tours, care of the author. The views expressed are mine and of my own accord. This novel is long, but beautifully written. If you love steamy romance then this novel delivers very nicely. I don’t exactly believe in reincarnation, but this story is fascinating. To think that two lovers can search for each other lifetime to lifetime is intriguing and sweet. The power of love through the ages. 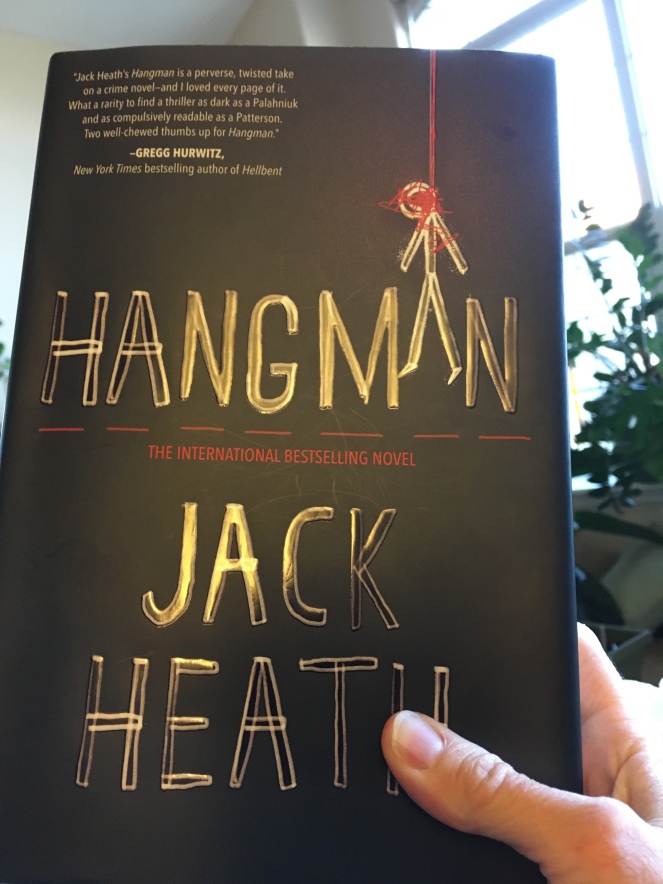 Do you like mysteries that keep you turning page after page? Hangman is a short, fast paced, engrossing read. If you are a fan of Dexter then you’ll want to add this novel to your TBR.

Timothy Blake is a man whose had the life from Hell. He grew up in the foster care system after his parents died tragically and lived on the streets after he aged out of the system. He managed to survive long enough to snag a special job assignment with the FBI. In exchange he’s got his own special prize for helping solve cases.

When he’s asked to solve a missing teen case he’s assigned to Agent Reese. She’s attractive and seems to get along with him, but Timothy always keeps others at arms length. When they start to get talking about life they both realize their pasts are connected. When she uses an old nickname for him “Scary Timmy,” he wonders if Agent Reese will figure out his secret?

While researching the case Timothy keeps getting stuck in the wrong place at the wrong time. He just wants to solve it so he can get his reward. Will Timothy solve the case in time, or will his secret be his undoing?

I received a complimentary copy of Hangman by Jack Heath from Harlequin Trade Publishing as a courtesy before I dive into the upcoming sequel. The views are mine and of my own will. 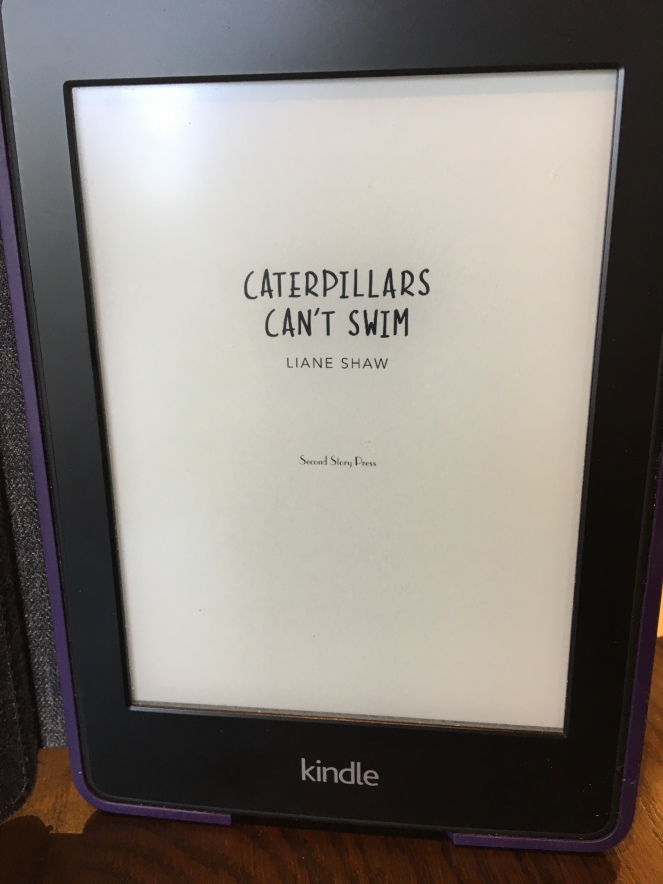 Ryan is minding his own business when he notices a woman down by the water twirling in a yellow skirt. She looks happy. One minute she is there and the next she disappears. Ryan looks over the railing to see if he can see her, but he sees no one. The water is down a bit of a hill and to get to it he’ll need to crawl. Ryan has cerebral palsy. He doesn’t think of anything else, but to find the unknown woman.

After saving the unknown woman Ryan realizes he knows this person. This person is Jack. Why was he wearing a skirt? Jack is a quiet classmate of Ryan’s, but he’s not friends with Jack. Both boys don’t want what happened to be blown out of proportion. Wouldn’t anyone else do the same if someone was drowning?

Enter Cody, Jack’s best friend from swim team. He’s a classic jock whose got an ego the size of the sun, trying to shine brighter than anyone around. Cody is determined to find out more about Jack and what really happened, but Ryan’s not sure on the fine details either of the why. When Ryan invites Jack to accompany both him and Cody to Comic Con in a gesture of friendship is it a recipe for disaster, or will it bring the boys together?

I received my digital copy of Caterpillars Can’t Swim by Liane Shaw from NetGalley. The opinions are my own and of my own accord. This young adult novel tackles the challenging subjects of depression, identity, friendship and what it means to be true to who you are. I loved this novel. I thought Ryan’s character is fleshed out well. I don’t have to depend on a wheelchair to get around, but this novel shows the realistic struggle to be noticed for who you are minus any handicap assistance you come with. Cody was a well represented high school jock, though how he changes throughout the story is interesting to watch. Jack is the classic sensitive kid who is scared to trust to be himself in front of others. This book will be a great edition to any YA fan’s bookcase, as well as any high school library. Let’s get the conversation going. Never let anyone suffer in silence. 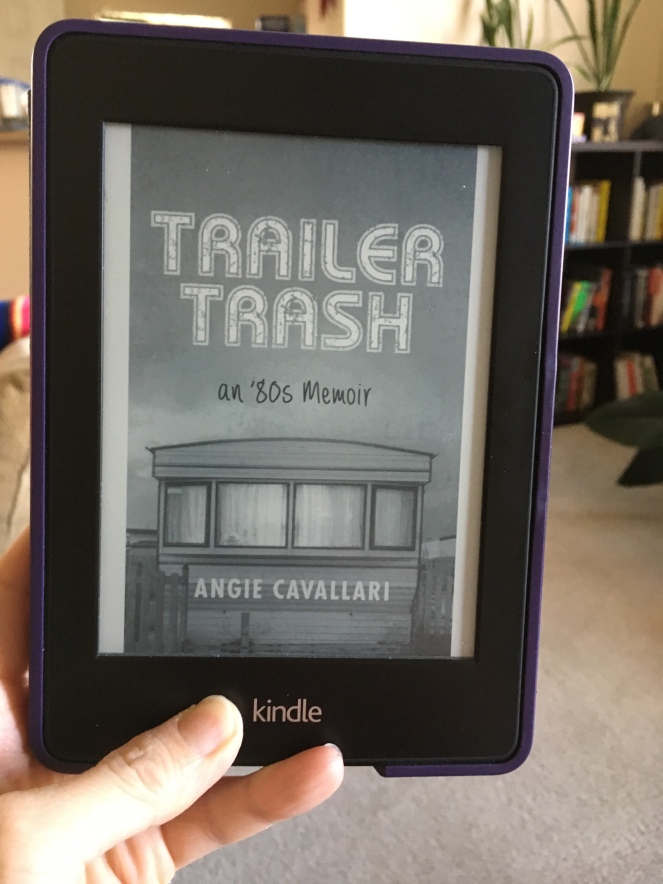 I grew up in the 80’s. I get nostalgic when I hear songs from the 80’s because then I think of the show “Kids Inc,” that was on Disney. I was so in love with that show my aunt found out how I could get free tickets and just had to bring ten friends. That was the day my fascination with Hollywood got dumped real quick. I digress though. When I saw Booktasters was looking for reviewers for Trailer Trash: An 80’s Memoir, I thought it sounded fascinating and who can say, “No,” to going down memory lane?

Angie grew up in a trailer park. Her parent’s owned and managed one, so that was her community and social circle. I’ve never lived in a trailer park, but Angie brings to life what it’s like. There are stereotypes about trailer parks and Angie gives you the honest peek into what life what like growing up in one. The descriptions of her neighbors are hilarious and candid. She touches on the topic of alcoholism and how her mother’s drinking affected her and her siblings. The pet chapter is classic and brings to mind how many assortment of pets kids go through going up. She also, describes the classic moments from childhood like skating at the roller rink on the weekends, getting to experience SlipNSlide and many other 80’s references.

I received a complimentary digital copy of Trailer Trash: An 80’s Memoir by Angie Cavallari from the author via Booktasters. The views expressed are mine and my own. If you also, are an 80’s kid then you’ll appreciate every page of this book. I laughed, teared up and cheered for Angie. Thank you Angie for allowing me to read your deeply personal story. I hope anyone who loves memoirs will give this book a chance. Trailer parks are definitely their own little communities filled with laughter, beer, fights and don’t forget the cops. 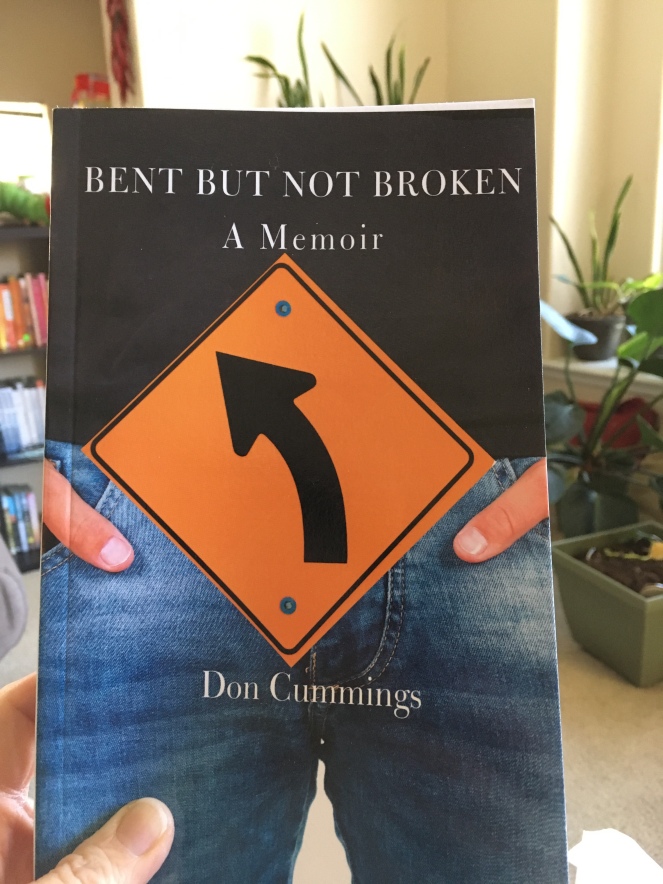 I don’t have a penis. I always wondered what it would be like. I wondered why men are so obsessed with their manly parts. After reading Bent But Not Broken I think I understand much better.

Don Cummings noticed his penis was changing and not in a comfortable way. He goes to a doctor to find out what’s wrong and discovers he has Peronie’s disease. His manly part curves which makes intimacy a tad challenging and gives him anxiety. He wants his penis to be like it was and wants a cute. This book is his journey in finding a way to cure his disease. He openly talks about how this affects his relationship with his partner Adam and how the treatments for this disease affected him.

I received my complimentary copy of Bent But Not Broken by Don Cummings from Heliotrope Books, care of TLC Book Tours. The views expressed are of my own accord and strictly mine. I recommend this book even if you are straight. This disease effects countless men and could potentially affect your partner, or spouse. To understand how this disease affects a man’s self esteem and how it changes him physically is vital to understand, to know how to be supportive and patient. This memoir was a tad outside my comfort zone due to said topic, but it was educational, has humorous moments and you’ll be cheering for Don throughout his book. To buy a copy click here and to find out more about the author.

You befriend a fellow bookworm on social media and the next thing you notice is they have posted a Go Fund Me link. You click the link and realize it’s for their mom, whose recently been diagnosed with stage 1 cancer. You can’t imagine being a senior in high school ready to graduate then having this life crushing news hit you just weeks before graduation.

I’ve never met Colleen. I have had family members have cancer. It’s a diagnosis you never want to have to encounter for yourself, or anyone you love. We all know treatment is beyond pricy. Every little bit helps. Think on it. Know that every donation helps ease Colleen and her family’s stress a little bit. I helped out a little myself. I couldn’t not.